New York University(NYU) is a private research university in New York City that was founded in 1831. It is one of the country’s largest private higher education institutions. The university is well-known for its social science, fine arts, nursing, and dentistry undergraduate and postgraduate programmes. The university’s main campus is in New York City, with satellite campuses in Abu Dhabi, United Arab Emirates, and Shanghai, China, which opened in 2010 and 2013. Around one-quarter of NYU’s student body was international last year, with students hailing from over 130 countries. For numerous years, NYU has had more overseas students than any other university in the United States. NYU has 11 academic centres across the world where NYU students studying abroad can stay, including locations in Berlin, Buenos Aires, Argentina, and Tel Aviv, Israel. The Brennan Center for Justice, the Sleep Disorder Center, and the Vincent C. Ross Institute of Accounting Research are just a few of the university’s many research institutes and centres. Undergraduate students are involved in research at NYU through programmes like the Dean’s Undergraduate Research Fund, which provides funding to students working on research projects. Let’s explore New York University notable alumni and more!

NYU’s alumni work in almost every field of the world, having graduated more than 500,000 students from the United States and 183 other countries. Heads of state, CEOs of Fortune 500 businesses, inventors, nobility, famous scientists, entrepreneurs, media celebrities, and astronauts are among those who have been invited. As of 2018, NYU’s faculty and graduates included Nobel Laureates, Pulitzer Prize winners, Fields Medalists, Academy Award winners, and a large number of members of the National Academies of Sciences.

Ursula Burns, an American business executive, was the CEO (2009–16) and chairman (2010–17) of the international document-management and business-services company Xerox Corporation. She was born on September 20, 1958, in New York, New York, United States. Burns grew up in a low-income housing building on the Lower East Side of Manhattan. Burns excelled in mathematics and went on to receive a bachelor’s degree in mechanical engineering from Brooklyn’s Polytechnic Institute of New York University in 1980. She started a master’s degree in mechanical engineering at Columbia University the same year and worked for Xerox as a summer mechanical-engineering intern under the company’s graduate engineering programme for minorities, which paid for a portion of her study. She was the first African American woman to serve as CEO of a Fortune 500 corporation, and the first female to succeed another female as CEO of a Fortune 500 company.

Chris Joseph Columbus is an American film director, producer, and screenwriter who was born on September 10, 1958. Chris Columbus is best known for directing the two-part Home Alone series. He studied at New York University’s Tisch School of the Arts and then worked as a screenplay writer for Steven Spielberg’s Amblin Entertainment. Columbus worked on writing for films such as Gremlins (1984), The Goonies (1985), and Young Sherlock Holmes while at Amblin Entertainment (1985). He went on to direct films like Adventures in Babysitting, Mrs Doubtfire, Nine Months, Harry Potter and the Sorcerer’s Stone, Harry Potter and the Chamber of Secrets, Percy Jackson & the Olympians: The Lightning Thief, and Pixels. Meanwhile, in 1995, Columbus formed 1492 Pictures, a production company that has produced films such as Night at the Museum, Fantastic Four: Rise of the Silver Surfer, The Help, The Young Messiah, and I Kill Giants, among others.

Jonas Salk, full name Jonas Edward Salk, was an American physician and medical researcher who discovered the first safe and effective polio vaccine. He was born on October 28, 1914, in New York, New York, and died on June 23, 1995, in La Jolla, California. Salk graduated from New York University College of Medicine with an M.D. in 1939. Salk joined the University of Pittsburgh School of Medicine as an associate professor of bacteriology and director of the Virus Research Laboratory in 1947. He began research on polio, an acute viral infectious illness of the neurological system, at the University of Pittsburgh. Salk was named director of the University of Pittsburgh School of Medicine’s Virus Research Laboratory in 1947. Salk’s second achievement came in 1963, when he established the Salk Institute for Biological Studies in La Jolla. He received backing from the March of Dimes and a $20 million grant from the National Science Foundation. Salk spent his final years hunting for an AIDS vaccine. He died in La Jolla, California, on June 23, 1995, at the age of 80.

Bill de Blasio (born May 8, 1961, in New York, New York, United States) is an American Democratic politician who served as mayor of New York City from 2014 to 21. He was also Hillary Clinton’s campaign manager for her victorious Senate campaign in 2000, as well as a New York City councillor from 2002 to 2009. De Blasio earned a bachelor’s degree in political science from New York University in 1984 and a master’s degree in international and public affairs from Columbia University in 1987. Though he was known as Bill since he was a child, he changed his name to Warren de Blasio-Wilhelm in 1983 (his mother’s surname was de Blasio) and then to Bill de Blasio in 2002.

Martin Scorsese (born November 17, 1942, in Queens, New York, USA) is an American film director. Scorsese graduated from New York University with a master’s degree in filmmaking in 1966. After directing a number of short films, he received critical acclaim with his feature film Mean Streets (1973) and was generally appreciated for Taxi Driver (1976). With films like Raging Bull (1980), The King of Comedy (1983), GoodFellas (1990), The Age of Innocence (1993), Gangs of New York (2002), which starred Leonardo DiCaprio; and The Aviator (2004), he rose to the top rank of American directors, known for his realistic violent portrayals of New York street life, innovative camera work, classic film knowledge, and spirited cynicism. Scorsese received an Academy Award for best director for The Departed (2006), a Boston gangster drama that was also nominated for best picture. Hugo (2011), The Wolf of Wall Street (2013), and The Irishman (2013) were among his later films (2019). He has also made several music documentaries.

Rudolph William Giuliani (born May 28, 1944, in Brooklyn, New York, United States), is an American lawyer and politician who served as mayor of New York City from 1994 to 2001. He was particularly well-known for his handling of the 2001 terrorist events on September 11th. Giuliani attended Manhattan College (A.B., 1965) and New York University for his education (J.D.1968). He was appointed United States Attorney for the Southern District of New York in 1983. He became the first Republican mayor of New York City in two decades in 1994. He was re-elected in 1997, credited with reducing crime, enhancing the quality of life, and boosting business, however, detractors claimed he protected police misbehaviour and slashed needed programmes. Giuliani was commended after the September 11 attacks in 2001 for his effective leadership of the city during the crisis.

Suzanne Collins (born August 10, 1962, in Hartford, Connecticut, United States) is an American novelist and screenwriter best known for her young-adult novel series The Hunger Games. Collins earned an M.F.A. in dramatic writing from New York University after studying theatre and telecommunications at Indiana University (B.A., 1985). (1989). She wrote largely for television in the 1990s, first for the short-lived sitcom Hi Honey, I’m Home! and subsequently for various Nickelodeon series (such as Clarissa Explains It All). She eventually worked as the head writer for Clifford’s Puppy Days, a PBS animated children’s show. Among the popular New York University notable alumni.

The Computing-Tabulating-Recording Company, which subsequently became IBM, was founded by Charles Ranlett Flint (January 24, 1850 – February 26, 1934). He was dubbed the “Father of Trusts” because of his business transactions. He was an ardent sportsman and a member of the syndicate that built the yacht Vigilant, which won eighth America’s Cup for the United States. The American businessman was one of the first to advocate for corporate trusts. In his opinion, pooling the net worth of numerous small businesses in comparable industries would result in higher profits for all parties involved. This was seen by Flint as a natural growth of American manufacturing. Among the popular New York University notable alumni.

These were some of the popular New York University Notable Alumni. Are you planning to study at NYU? Contact our Leverage Edu experts for end-to-end guidance from application to Visa process. Call us at 1800 57 2000 to book your FREE 30-minutes counselling session today!

Universities in USA without Application Fee

Budgeting and having options are important factors to take into account when considering studying abroad. However, applying to… 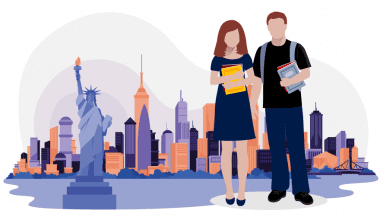 Study in USA Without IELTS

For students all over the world, the United States of America is a dream destination for higher education.… 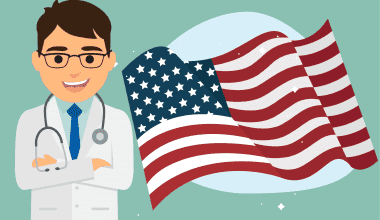 While MBBS is an undergraduate degree, Doctor of Medicine or MD is a postgraduate medical degree pursued by…

For a college student, studying abroad can be one of the most valuable opportunities as they have the…