Top Entrepreneurs in India: Success Stories You Need to Hear

Before you are a leader, success is all about growing yourself. When you become a leader, success is all about growing others. —Jack Welch. What’s the first thing that comes to your mind when you hear the word entrepreneur? Big fancy office, investor meetings, freedom to whatever you desire. An entrepreneur is someone that has a vision and passion to create a change. Courage to dream differently than others and turning it into reality by hustling every day. Building a business from scratch is not a cakewalk, it requires consistent hard- work and determination to do something big. Here is the story of NextGen top 7 entrepreneurs in India that will fill your heart with inspiration to dream big!

Here is another inspiring Story of Meghan Markle from Rachel in ‘Suits’ to the Royal Palace and Beyond!

We dream of a future where menstruation is not a taboo, not a curse, but a welcoming change in a girl’s life – Aditi Gupta

Aditi Gupta is a queen of versatility. She is one of the top entrepreneurs in Inida, an author, and the co-founder of the comic Menstrupedia. Exhausted and worried about the misconceptions and prejudices around menstruation, she embarked on a journey to bring change. With support from her husband, the Menstrupedia comic was launched in 2012. In the year 2014, she was on the Forbes India ‘Under 30’ list for her perseverance towards dismantling the taboo. Today, Menstrupedia is used in more than 6,000 schools in around 14 languages. Aditi is also a social entrepreneur working towards raising awareness and dismantling misinformation about menstruation.  Now, she is inspiring millions every day through her Ted Talks and has been featured in The Wall Street Journal, Reuters, CNBC, and BBC.

Also Read : The 20 Most Iconic and Inspiring Fictional Characters of All Time!

“Your brand reflects your culture, purpose, and identity. It’s never too early to start thinking about it.” – Ritesh Agarwal

Do you think a college degree guarantees success in life? The story of Ritesh Agarwal’s is truly inspirational who was a college dropout. After finishing school, Ritesh moved to Delhi to pursue an undergraduate degree in 2011. Within two years of college, he dropped out and subsequently was chosen for the Peter Thiel Fellowship. Ritesh won the 2013 Thiel Fellowship program becoming the first Asian resident. On receiving $100,000, the dream of a budget hotel startup turned out to be a mega-giant popularly know as OYO now. Ritesh Agarwal has many awards and achievements one of them is the title of the youngest self-made billionaire in the world and among the top entrepreneurs in India.

Checkout ‘Becoming’ Your True Self: 10 Life Lessons by Michelle Obama

“In so many ways, our business is very, very unique. For example, in India, people pay with cash, and we accept cash from day one. And a lot of people in India pay with cash. And that’s part of our business model” – Bhavish Aggarwal

Bhavesh Aggarwal’s life has been extremely intriguing for many people. After completing four-year college education in software engineering and designing. He pushed ahead to start an internship at Microsoft Research India. After working for almost 2 years, Bhavish took a decision that will change his whole life. The Foundation of Ola Cabs was laid with co-founder Ankit Bhati.

What was the inspiration behind the startup? The thought came to his mind when he ended up in a horrendous situation with a cab driver requesting more cash for the vehicle. The terrible conduct of the cab driver caused Bhavish to ponder more over the taxi industry. Presently the organization has made new strides to the auto-cart booking administrations by delivering Ola Auto. Another motivation behind why Ola saw such an accomplishment out and about is the value point. They came at a fixed rate and were less expensive than the customary methods.

“There is an entrepreneur in everyone. Most people would like to work for themselves given a situation where you earn the same amount of money” – Deep Kalra

“Good things never come easy, you have to work for it.” Deep Kalra justifies this better than anyone. Building a brand that became a household name is not a one-day job. It took a decade to build MakeMyTrip as one of the most used travel portals and Deep Kalra to be included in the list of top entrepreneurs in India. After getting a degree in Economics, Deep Kalra worked in the banking sector but soon realized that banking is not made for him. In the year 2000, he understood the conceivable reach and potential of the web. He gradually began to understand the maximum capacity of how and what the web has to bring to the table to the ventures that are as yet limited by the old conventional strategy. The reason for MakeMyTrip was to make online travel simpler and helpful.

The journey was not easy and filled with hurdles. In mid-2001, when the business was missing adequate financial backers to keep it running. Deep Kalra did not lose hope. He continued pushing all the obstacles becoming the well known successful entrepreneur in India

Being Successful in life is not easy. Here’s Priyanka Chopra’s Journey From a Small Town Girl to a Global Superstar!

“You can get people from varied backgrounds, it’s really about understanding how this person thinks and approaches a problem” – Ashwini Asokan

There is a preconceived notion in India that married women should only focus on kids and family. Breaking the social norms and becoming an inspiration to millions of married women in India is Ashwini Ashokan. Ashwini Ashokan is among the top entrepreneurs in India. Launching cloud-based stage Mad Street Den with her significant other Anand Chandrasekaran. With the experience of more than 10 years with the versatile development group at Intel’s Interaction and research lab in Silicon Valley, quitting a well-settled job was not easy.

A mother, UI originator, business improvement rep, ethnographer, program supervisor, item administrator, and a craftsman assisted her with building her own way. Ashwini is an old-style artist included in Fortune’s 40 under 40 records, Vogue, TechCrunch, Nikkei. This is just the beginning for Ashwini Asokan.

The vision of Yashish was to give monetary protection to the working class individuals if there should arise an occurrence of the direct outcome imaginable. The essential focal point of the organization has consistently been educating individuals about wellbeing and term protection. This is a result of the strong establishment that this organization stands on. He actually figures out time in his everyday schedule to swim and run. Investing energy in swimming and running has gotten something that brings such a lot of happiness to Dahiya, as he thinks about these exercises to lessen the degree of stress that accompanies life.

“Wolf represents me, it represents being a pathfinder and always taking care of your pack come what may, always!” – Akshay Chaturvedi

Studying abroad is still a dream of billion students in India. There are some that lack financial resources and others don’t have adequate knowledge. Akshay Chaturvedi launched Leverage Edu, one of India’s fastest-growing startups. Leverage Edu is on a mission to help students fulfill their dreams. From career guidance by experts to now launching the biggest scholarship in India worth Rs. 5 crores. Akshay Chaturvedi concocted the thought when he was ready to go to school in 2015 and afterward brooded it in Draper University’s business venture program to dispatch tasks in April 2017. That very year he was chosen as India’s Prime Minister’s Champion of Change. Leverage Edu began in 2015 as a stage to associate understudies with guides. It was hatched at Draper University in Silicon Valley, a business school. Influence Edu handles everything from directing to confirmation. It additionally assists understudies with instruction credits and convenience.

Leverage Edu, his venture focussed on professional advising, is on course to check ₹10 crores in income in FY20 and has raised about $3.5 million from any semblance of Blume Ventures and DSG Consumer Partners, across two financings adjusts. He professes to have obliged around 10,000 understudies.

That was all about the top entrepreneurs in India. Hope this article filled you with motivation and the drive to create. For the latest updates around study blogs, you can follow us on Instagram, Twitter, Facebook & also subscribe to our newsletter. Leverage Edu wishes you all the best for all your future endeavours.

15,000+ students realised their study abroad dream with us. Take the first step today. Famous Personalities
Talk to an expert

A progressive and empathetic leader, a new-age working mom and the youngest female Prime Minister of New Zealand,…

Have a look at your surroundings. From Air Conditioner/Cooler, pencils, and Laptops to earphones, chargers, and electric heaters,… 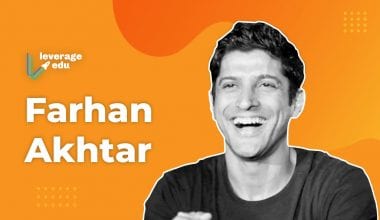 Surrounded by various commemorated figures in the Bollywood industry, Farhan Akhtar is one of the versatile personalities who…

From Hermione to Little Women: Emma Watson, a True Role Model for Millennials!

Acing the beloved character of Hermione who is endeared for her bossy streak and all-encompassing knowledge, Emma Watson…