What are the Various Branches of Astronomy?

What we call the Sun, Moon or the Earth today were once recognised as colossal balls of masses. It was possible through the study of Astronomy, that we have unleashed some mesmerising mysteries of the universe. Astronomy is one of the oldest branches of science which is concerned with the study of celestial objects and phenomena. Astronomy is a vast domain that houses a bunch of sub-fields that revolve around the study of specific elements of the universe. If you are eager to pursue a career in Astronomy and want to know more about unique branches of Astronomy, then, stay tuned with the blog as we will enlighten you with some amazing facts and figures about the universe.

Astronomy involves the study of all-encompassing matter or phenomenon that occurs beyond the earth’s atmosphere. All the celestial bodies, stars, galaxies, etc are observed and examined with intricacy in this field. While studying Astronomy or branches of Astronomy, you will come across theories regarding the evolution and origin that are devised using the principles of mathematics, physics, geology and biology.

Being one of the primary fields of science, Astronomy encompasses a study of boundless entities, hence, it has independent fields of study with specific focuses. Enlisted below are some of the popular branches of astronomy.

Astrophysics is one of the most popular and renowned branches of astronomy that relies on employing efficiently the various principles of physics within the field of Astronomy. Majorly, the field examines the nature of different astronomical objects more than their arrangements or motions in space. Prominently, Astrophysics strives to answer How the universe works?; and hence, objects like sun, stars, galaxies, planets, etc are studied in depth by applying the physical properties and processes. Luminosity, density, temperature as well as the chemical composition are some of the core properties of astrophysics.

Astrometry is an imperative part of physics or astrophysics. It primarily deals with arrangements, motions and behaviour of celestial bodies and studies the directions, angles between celestial objects as seen on the celestial sphere. It also examines the quality of light, specifically its intensity or photometry and colour including light intensity as a function of colour or wavelength. The main concern of the field is the measurements of distances to celestial objects by triangulation because without any knowledge of the distance of planets, stars, and other galaxies there can be a correct understanding of the cosmos

Planetology or Planetary science is referred to as the scientific study of planets. It includes the study of moons, planets, micrometeoroids, gas giants primarily, etc that fall within the solar system regarding the different processes that formed them. Listed amongst the essential branches of Astronomy, Planetology enables one to evaluate the dynamics, formation and interrelations of the celestial objects. It is an interdisciplinary field that vividly uses the principles of Astronomy and Earth Science. If you are curious to know about how the planetary system was formed as well as how it works, then diving deep into Paleontology is the best option for you.

Cosmology is one of the most interesting branches of astronomy. It is centred around the investigation and vast exploration of the beginning and evolution of the universe from the Big Bang to present and the future as well. According to NASA Cosmology is the large scale study of the minute properties of the universe as a whole. Along with the origin of the universe, it also studies its structures, dynamics, dark matter, dark energy, string theory as well as various laws of science concerned with these areas. The most baffling questions of all times, that whether there is a parallel universe or not, is something that cosmologists deal with.

How to Become a Rocket Scientist?

Previously known as Exobiology, Astrobiology is one of the prominent branches of Astronomy that is mainly concerned with studying and understanding the origins, the process of distribution and also the posterity or future life of the universe. Astrobiology is chiefly concerned with exploring the question related to the existing building blocks of lives along with extraterrestrial life if it exists. By combining the knowledge from fields like planetology, molecular biology, astronomy, physical cosmology, biophysics; Astrobiologists try to apprehend the possibility of life beyond earth. The field can be your go-to option if you possess a zeal for exploring biological possibilities in the universe.

The field that is related to the study of the internal structure of stars by interpreting their frequency spectra is known as Asteroseismology. Although from the Earth surface, stars seem to be tiny little twinkling objects but stars are huge celestial bodies. Because of which there are various oscillation modes penetrating in different depths inside a star. With the help of these oscillations, it has now become easier to obtain useful information about Stellar interiors which has led to huge discoveries in Asteroseismology. Along with this the field also emphasizes on the analysis of frequencies of the oscillations that take place inside the sun to examine the physical parameters of the ear inner layer of the sun.

Spanning across the disciplines like chemistry, chemical biology, planetary sciences; astrochemistry is one of the most prominent branches of astronomy. The field involves experimental as well as computational laboratory studies for generating data regarding interpretation or explanation of multiple astronomical observations which provide data input for models. These data theories help in the formation or evolution of small or large particles in varied astrophysical. The Astrochemists use satellites, telescopes along with other space vehicles to collect the spectroscopic data. They also put in use the computer visualizations that help them in elucidating the collected observations in terms of physical as well as chemical principles.

This is again one of the pivotal branches of astronomy. Selenography is all about the study of all the nuances of Moon, its physical features as well as the surface. Scientists who have a stronghold on selenography to come up with high-resolution images of a Moon. pursing selenography can empower you to pursue lucrative careers in the field of astronomy.

In this part of astronomy, scientists do read about the structure, composition, physical properties as well as dynamics and evolution of Mars. It is frequently used in order to study the geology of Mars.  Areology offers a lucrative career in the landscape of astronomy.  Every scientist nowadays is keenly interested in observing the overall composition of Mars.

Again one of the important branches of astronomy is Photometry. This is the domain of science where a scientist measures a light which is perceived by a human eye. Photometry is quite distinctive from radiometry that measures radiant energy. Overall we can say that it is a technique which helps us measure the intensity of light radiated by astronomical objects.

What are the different fields in astronomy?

Where did Astronomy originate from?

Astronomy was basically originated from Mesopotamia. It arose in ancient Babylonia in the central Mesopotamia.

Which instrument is used for astronomical photography?

It is the telescope instrument which is used for astronomical photography.

Thus, we hope that this blog has provided you with extensive details of different branches of astronomy and its related fields. Are looking forward to exploring top-notch courses in these or likely fields? Reach out to our  Leverage Edu experts and they will assist you in finding the best-fi course along with a renowned university for it. Book your free 30 minutes of e-counselling with the team to discover new educational possibilities. 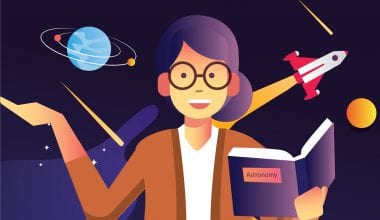 You may have come across the term “heavenly body” in your science textbook at some point. Have you… 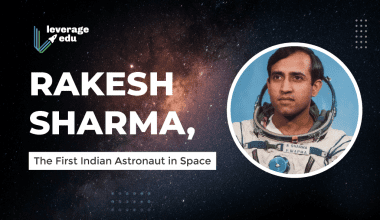 In 1982, Rakesh Sharma became the first Indian to set foot in the space and made India proud!… 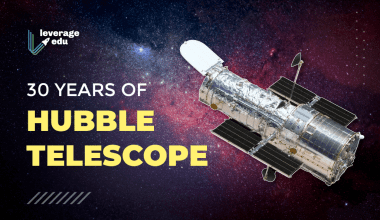 30 Years of Hubble Space Telescope, the Ultimate Mountaintop in Space!

It has been 30 years since the launch of the Hubble Telescope by NASA on 24th April 1990.…